Voi Sapete Quel Che Fa (You Know What He Does) 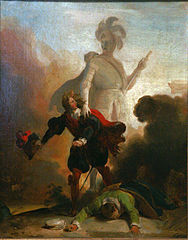 Decided yesterday that Jeeves prefigures the Artisanal Servant of the future. He is in fact an Artist. His medium is Bertie Wooster and his social network. (Can’t resist: Aunts Dahlia and Agatha; pals Augustus “Gussie” Fink-Nottle, Harold “Stinker” Pinker, and Hildebrand “Tuppy” Glossop.) The entire edifice of upper class life in Wodehouse’s stories comes to depend on Jeeves.

Mozart’s operas “The Marriage of Figaro” and “Don Giovanni” feature servants as major characters. Leporello opens “Don Giovanni”. While Giovanni is inside raping Donna Anna, he waits outside and complains about his lot in life: “Io non voglio più servir” ( I don’t want to serve anymore). Leporello is clear-sighted about his master’s wickedness, but he admires him, too. He boasts in the Catalog Aria in Scene 2 about the thousands of women his master has seduced. We are in the 18th century, and “master” is literally what Don Giovanni is to Leporello: he beats him. No Artisanal Service here: Leporello has no options and must head off to find a new master when Giovanni meets his dreadful fate.

Figaro in The Marriage of Figaro is actually running the show at Count Almaviva’s house: he is the head of the Count’s servants. The Count tries to exercise his feudal prerogative and have his way with Susanna, Figaro’s fiancée. This would have been common and unquestioned before the eighteenth century, and Figaro would simply have had to stand aside. But this story takes place on the brink of the French Revolution. Feudal privilege and aristocratic license are about to give way to bourgeois marriage and domesticity. Don Giovanni gets dragged off to Hell by a ghostly avenger; Count Almaviva gets manipulated by Figaro (through jealousy, in a somewhat situation-comedy manner) into renewed desire for his Countess. We’re heading into the territory of the miracle-working Jeeves.

These fictional servants are not passive: they talk back and have their own schemes. For a perfect servant, get a robot. (C3PO and R2D2? Maybe not.) But that brings us back to where we started, thinking about automation and artificial intelligence replacing human labor.

Having intelligent machines as servants may not work out so well either. More later.

Open Source to the Rescue?

“…even if consumer software companies like Microsoft and telecommunications companies like AT&T and Verizon stop cooperating with the N.S.A., your online security will remain compromised as long as the agency can still take advantage of weaknesses in the Internet itself.

“Fortunately, there is something we can do: encourage the development of an “open hardware” movement…The open-source movement champions an approach to product development in which there is universal access to a blueprint, as well as universal ability to modify and redistribute the blueprint. Wikipedia is perhaps the best-known example of a product inspired by the movement. Open-source advocates typically emphasize two kinds of freedom that their products afford: they are available free of charge, and they can be used and manipulated free of restrictions.

“But there is a third kind of freedom inherent in open-source systems: the freedom to audit. With open-source software, independent security experts can scrutinize the code for vulnerabilities — whether accidentally or intentionally introduced. The more auditing by the programming masses, the better the security. As the open-source software advocate Eric S. Raymond has put it, “given enough eyeballs, all bugs are shallow.”
Let’s Build a More Secure Internet