“All currency is neurotic currency.” 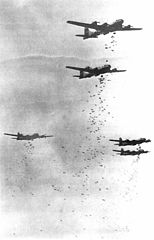 “Breaking Bad” episode 515, “Granite State,” is the next to last episode in the series. I can’t imagine how it’s going to end, but it will be completely logical, consistent with the development of the characters, and devastating. Both Walt and Jesse are in Hell now: what will they do?

Speaking of logic (and Hell), I was just listening to Dan Carlin’s “Hardcore History” podcast, show 42, which tells the story of strategic bombing in World War II, leading up to the atomic bombs dropped on Hiroshima and Nagasaki in 1945. The title of the show is “Logical Insanity.” Carlin says that the logic of the war led sane, often moral people to order and condone monstrous actions. The atomic bomb attacks seem uniquely awful to us in hindsight, but we were not present for the London Blitz in 1940, the Hamburg and Dresden firestorms, and the even more horrific bombing of Tokyo in 1945. Count your blessings, and pray for peace. And if you care about history at all, go discover Dan Carlin’s “Hardcore History”.

There are now more than 500,000 people alive who are over 100 years old, and their numbers grow by 7% a year. But people over 110 are much rarer, and their numbers do not appear to be increasing. There seems to be some sort of intrinsic limit to the natural human life span. Good new for the pension industry (and the Social Security Administration).

I would guess that it’s only a matter of time before drugs or genetic therapies come into common use that can substantially increase our natural life span. There are intriguing hints from animal studies that the problem is not that hard to solve.

I was struck with the fact that there are only seven people born in 19th century known to be alive today. I often astound my younger friends by telling them that when I first started working, some of the people I worked for were born before 1900, which is hard to imagine if you were born in say, 1987. But it’s true: I was born in 1952 and I knew dozens of people from my grandparents’ generation. Many of them were born before 1900, often in places that no longer exist, like the Russian or Austro-Hungarian empires.

Why Are There so Few People Over 115 Years of Age?

“Silence is so accurate.”